Skip to content
Home › PC › Antivirus & Security › 10 Things Your AntiVirus Must Do. Benefits of Using an AntiMalware. 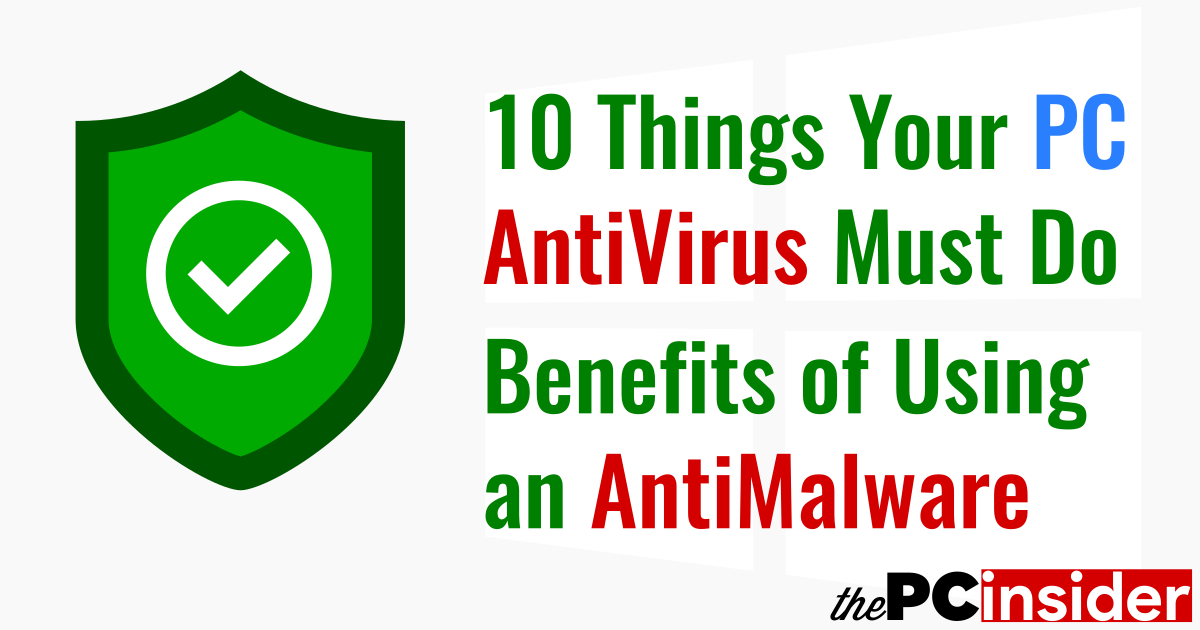 Here are the Top 10 Things that an Ideal Antivirus Must be able to do to a Windows Computer from all kinds of Malware and Hackers.

An AntiMalware (or commonly known as an AntiVirus) is a computer security software that protects the computer, prevent malware, and removes, in real-time from malware and threats. However, not all Antivirus are the same. Here is the list of 10 things that an ideal Antivirus must be able to do.

1. Complete Real-time Protection from All Kinds of Malware

The term Antivirus is a misnomer, the correct term is Antimalware. The term Malware is used to describe a Malicious Software. There are many types of malware, and a Virus is only one of its types. Here are some of the types of a Malware. An ideal Antimalware (or an Antivirus) should be able to protect your computer from all kinds of Malware.

A False Positive is defined as a legitimate file marked as a malware by an Antimalware. In the case of False Positives, less is better. This is the thing that separates the good from the great. A security software can flag any suspicious or unknown file, but in this process, it could also block some legitimate files. What makes an Antivirus great is not only the detection ratio but also the accuracy of those detections.

There are multiple technologies used by Antivirus products to keep you protected from malware.

Following are the 10 Malware Detection Techniques used by AntiMalware/AntiVirus.

Your Antivirus should have a full set of Scan options:

Following are the 7 types of Scan options found in Antivirus/Antimalware are:

An Antivirus must be able to give you an all-around protection from the Internet-borne threats. Some of the most important types of Web Shields are:

While selecting an Antivirus, consider how early can an Antivirus vendor create and deliver the definitions for the newly found threats to its users. Visit the Settings of your Antivirus, and go through its Update options; make sure that to configure it in a way that you receive your updates as early as possible.

Signatures/Definitions have taken a backseat with more advanced technologies like Behavioural Analysis, Heuristic Analysis, HIPS, Sandboxing, Cloud Analysis, etc. taking over. But still, they act as the backbone of an Antivirus for the combating the most common types of malware.

An Antivirus should include additional security tools as well that can be helpful in recovering an infected computer, and performing other computer security related tasks.

One of the most important security tools is the bootable antivirus rescue disk creator. It lets the user create Bootable USB/CD Antivirus Rescue Disks, which can be used to scan the computer for malware from outside of the Windows, or when the Windows is unbootable due to malware infections.

This can be helpful in the detection and removal of those types of malware that have placed themselves deep into your system, and that boot before your Antivirus and hide themselves from the Antimalware that you have installed on your computer. A bootable disk bypasses the normal Windows boot process, and boots through the bootable disk itself. The contents required to run the live environment are loaded into the system memory. This way, the malware are not able to boot, and hence become detectable.

8. Compatibility with Other (Security) Software

An Antivirus is not the only computer security product that users install on their system. It should be compatible with other products such as the Firewall products from other companies.

Before installing any Antimalware, check if it is compatible with other real-time security software installed on your computer. For example, if you have installed a firewall from one vendor, and now you are going to install an Antivirus from another vendor, then make sure that these two are compatible with each other. The Antivirus and the Firewall are two different products; they are made to run together to provide the complete protection to a PC. But sometimes, the features included in these two types of software overlap with each other. For example, both of the security products, the Antivirus and the Firewall, may have HIPS included in them. Now, the HIPS component included in both of them will try to run at the same time. This could cause your system to crash, or a system slowdown at the least.

An Antivirus should not impact the system performance too much. We know that Antivirus is a type of program that has to be run continuously, scan files all the time whether to surf a webpage, open email attachments, download a file, execute a program, connect a removable storage device, etc. Such a real-time program uses system resources. But, this impact of this real-time protection on the performance of the computer should be as little as possible. What’s the point of a protected PC that can’t be used to do anything! You don’t want only the Antivirus to run on your computer. It should be light enough to let the user do his actual work.

Take care of these things before purchasing an Antivirus.