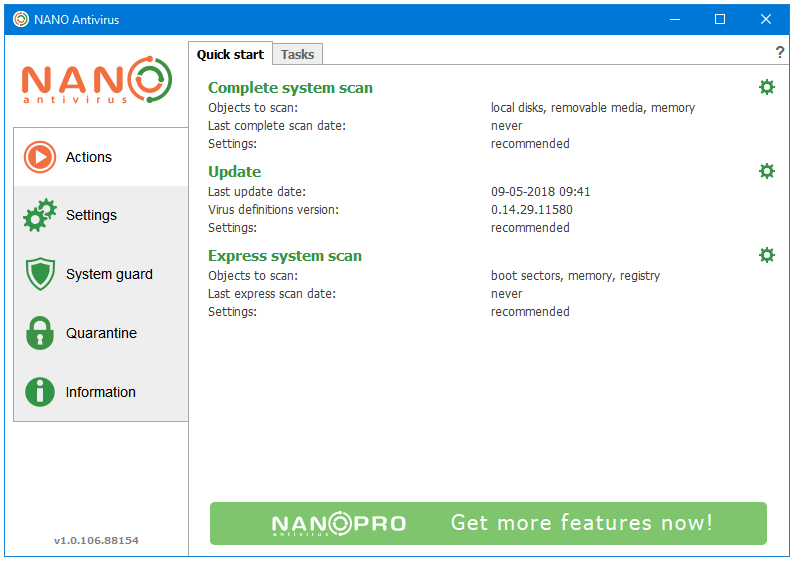 NANO Antivirus protects the user computer in real-time from all types of malware using their Signatures, Heuristics Analysis, Web Protection, and Cloud technologies.

Most of the Free Antivirus products are the lighter or the stripped down version of the main paid product. Some of them are more like a promotion rather than a free version. However, that’s not the case with NANO Antivirus, which is a full-featured Antivirus program.

NANO is what most of the famous Antivirus products of today looked like way back when they were getting famous. When they had few or no paid products to offer. And, their free versions had none to minimal advertisements and promotions.

AV-TEST did not test NANO in their most recent test.

AV-Comparatives did not test NANO in their most recent test.

The NANO Antivirus opens to the Quick start tab in the Actions section.

There are five sections in NANO that cover everything about this Antivirus.

Actions is the default window of NANO Antivirus. It provides the important computer security information in the following two tabs.

Tasks – Tasks is the scheduled scan feature by NANO. You can configure and customize your scans using various settings such as file types to scan, objects to scan, actions on threat detection, etc.; and then save them as Tasks. The Free version of NANO Antivirus lets the user create three tasks at most. 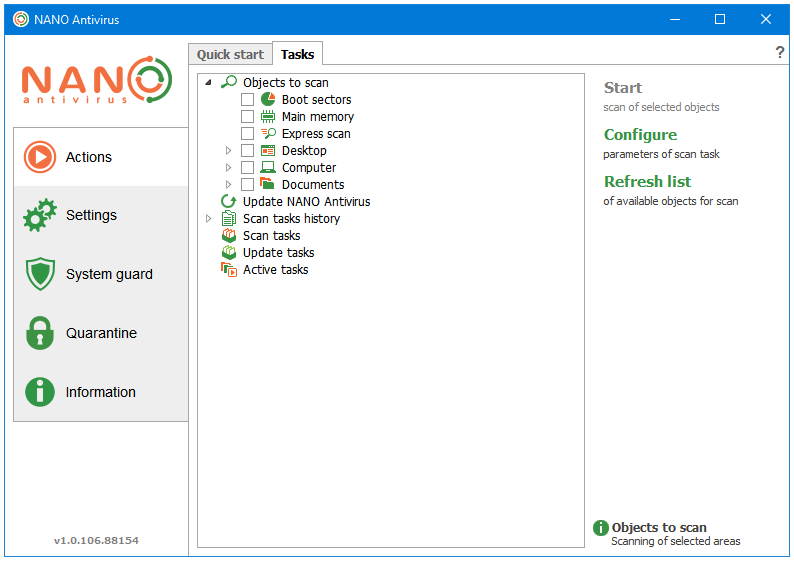 All of the program settings are divided into the following five tabs under the Settings section.

Common – The Common tab gives you an overview of some of the basic miscellaneous settings. 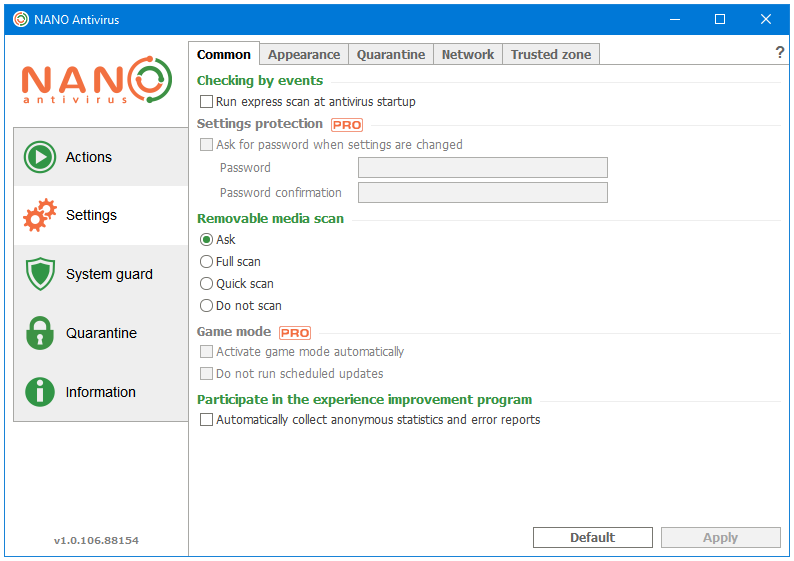 Appearance – In the Appearance tab, you can access the settings related to the customization of the program appearance. 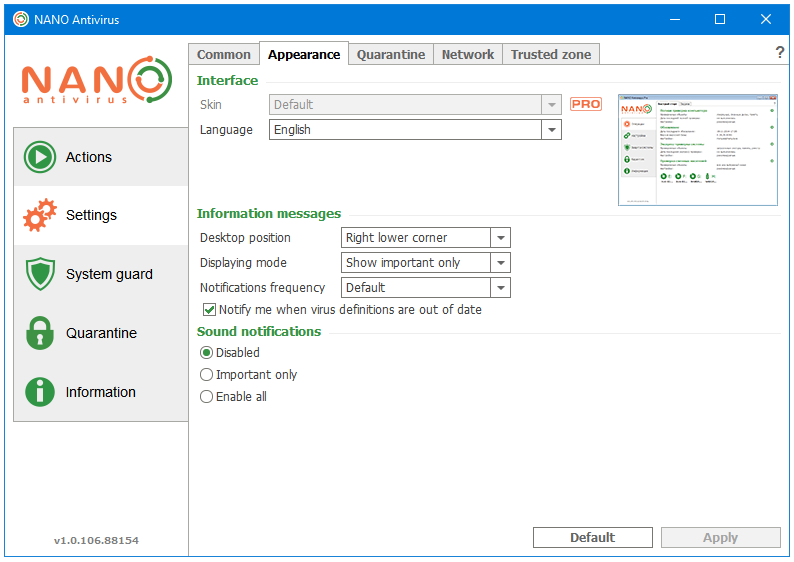 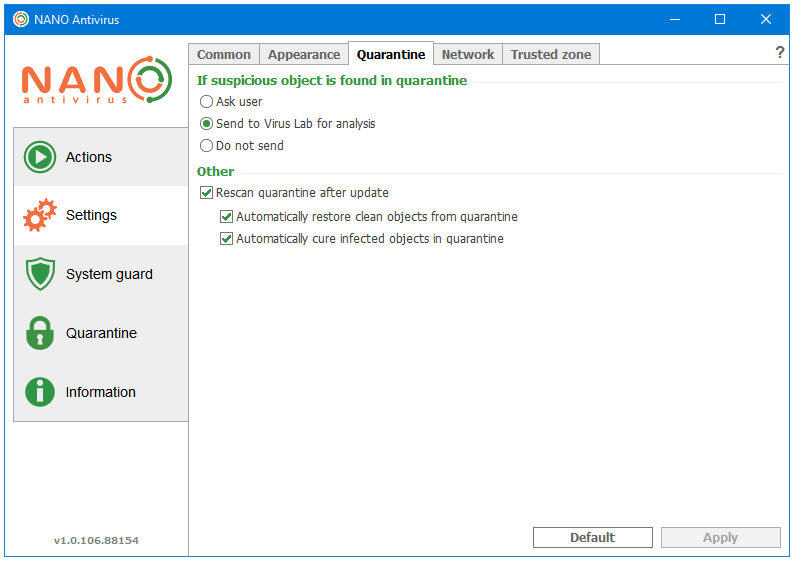 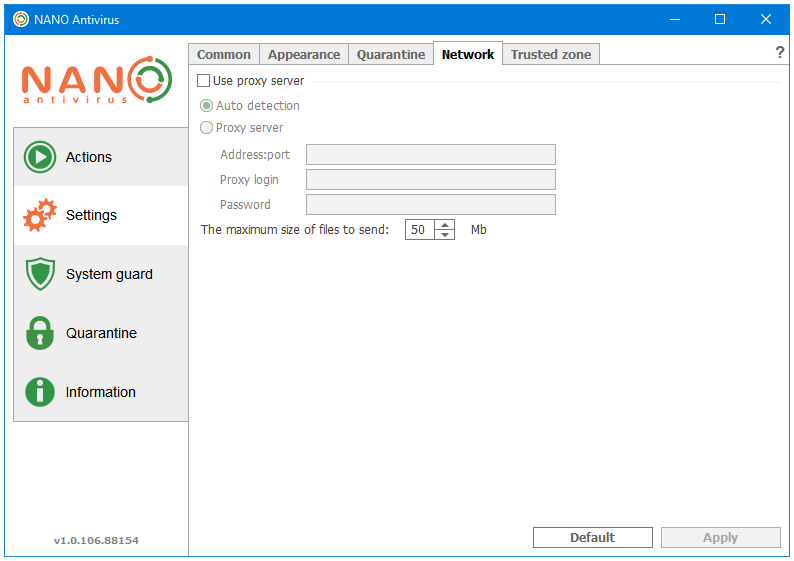 Trusted zone – Trusted zone is like a white-listing or an exclusion feature. You can add files and folders in the trusted zone, and NANO will assume them to be legitimate files, and exclude them from scanning and the system guard working. 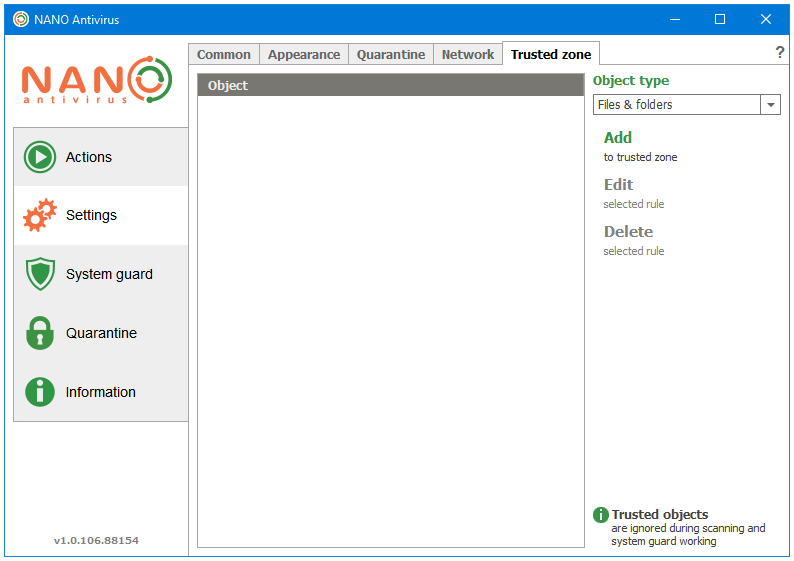 System Guard is the main Antivirus component of NANO. It uses two real-time anti-malware shields to protect the user computer from malware attacks. 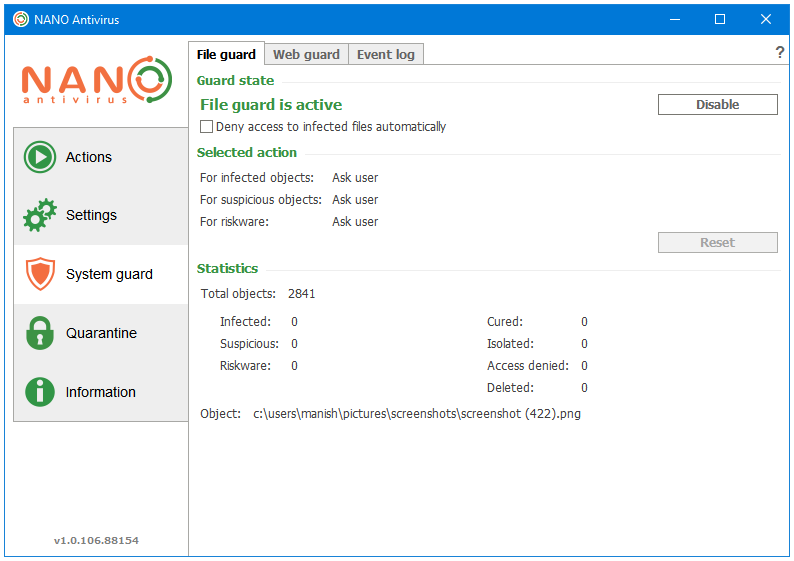 Web Guard – The Web Guard provides protection from the Internet-borne threats. It monitors all kinds of Network traffic to block any malicious or phishing attempts. 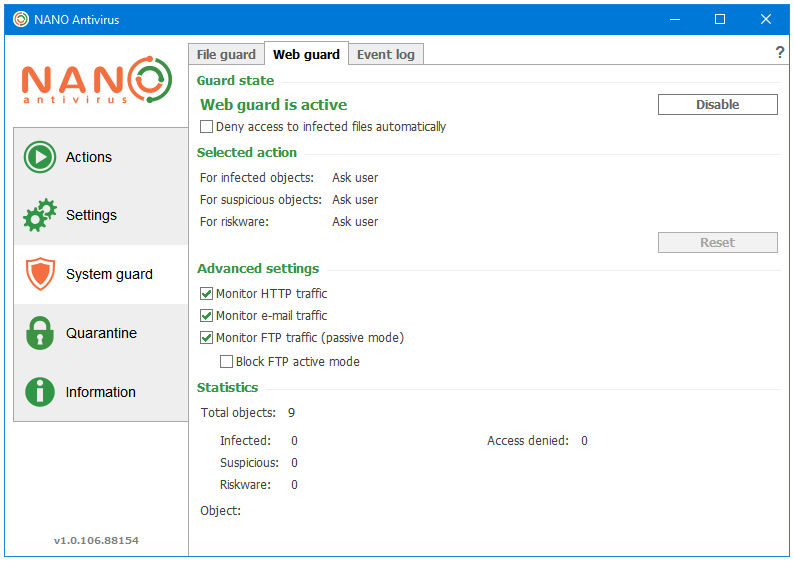 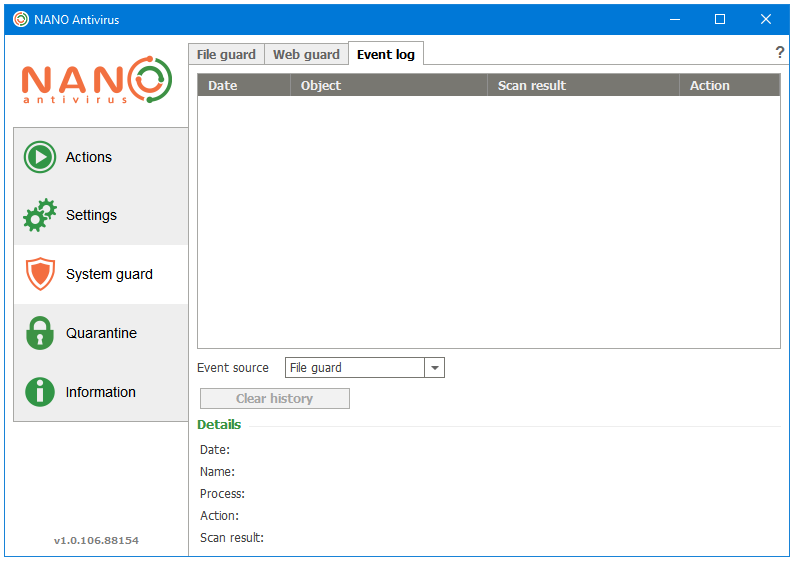 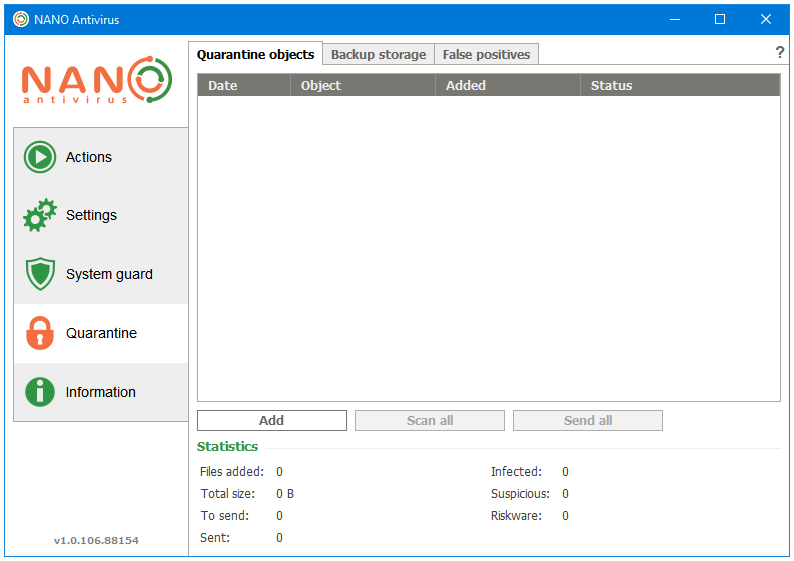 Backup storage – The Backup storage window displays all of the items that were detected as malware by the Antivirus. You can perform additional actions on these items present here such as Restore or Remove. 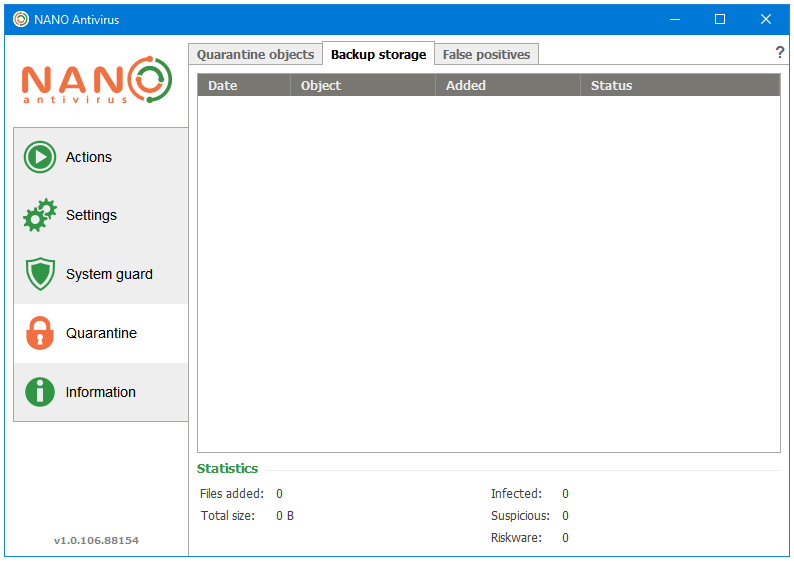 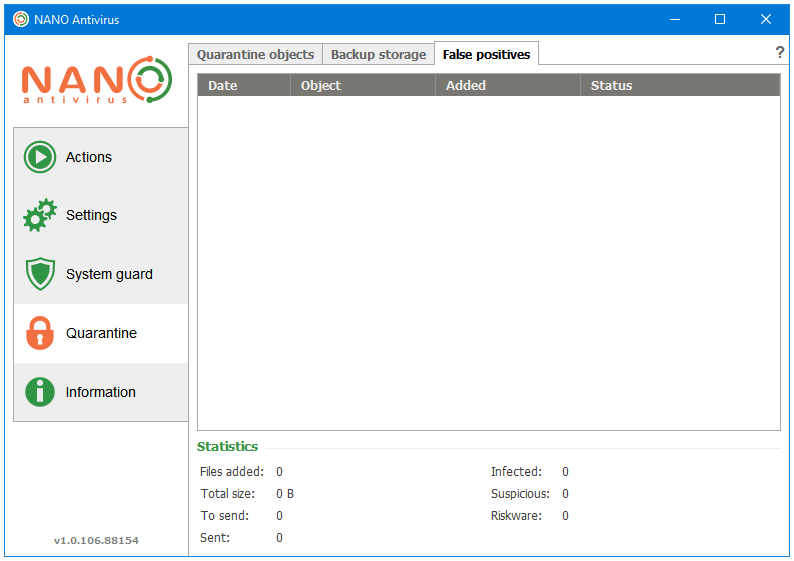 The Information section has the following three tabs that display the product and user license related information.

About software – The About software tab displays the details about the antivirus engine and virus base versions, and other support links. 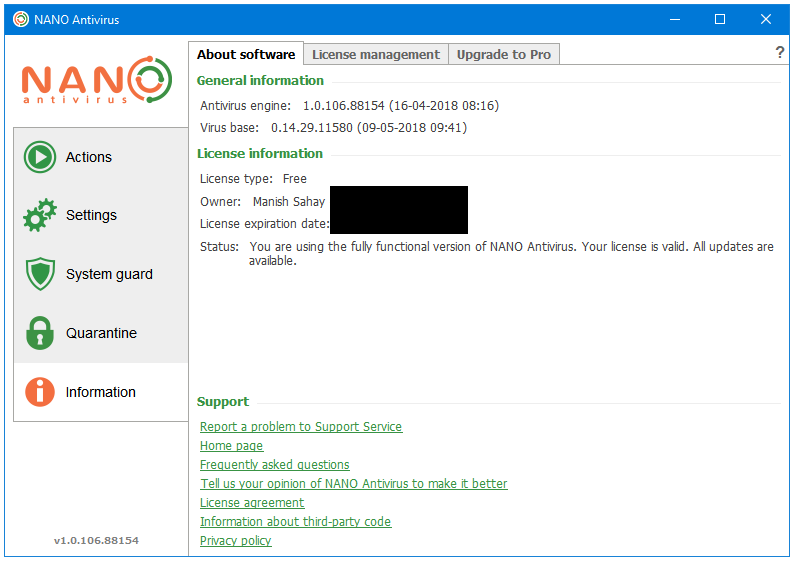 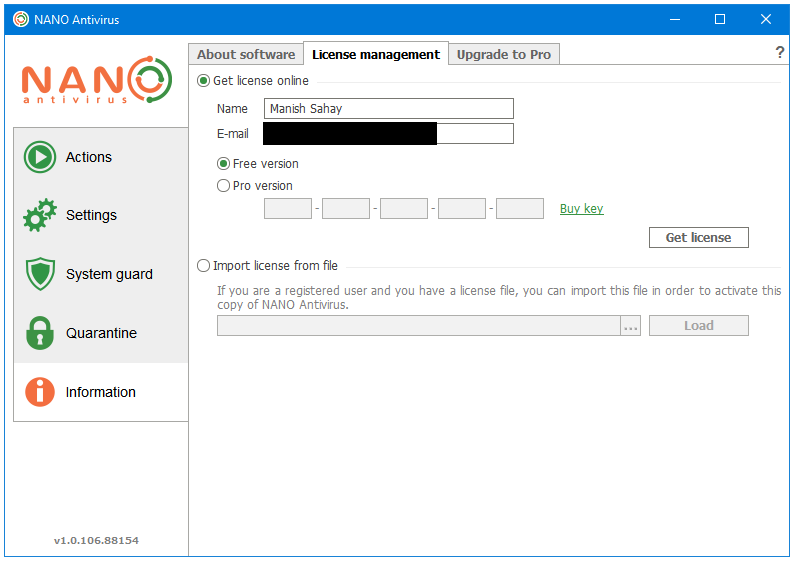 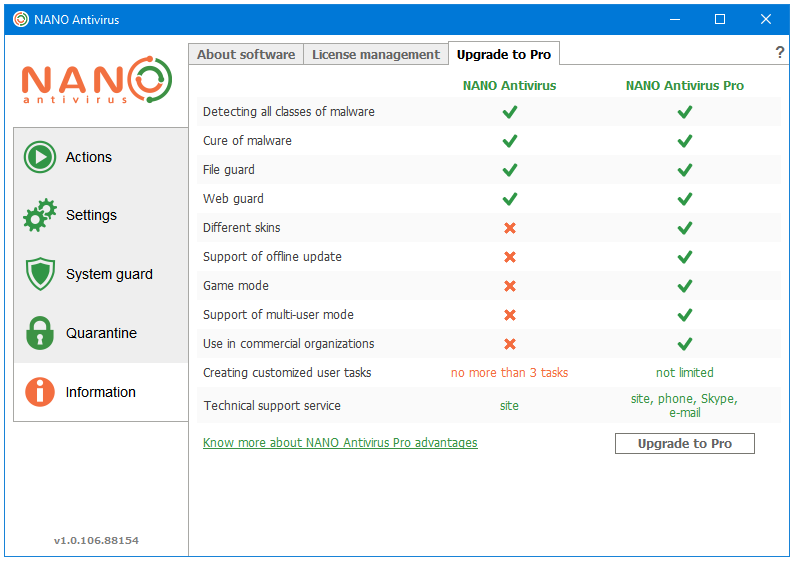 CPU and RAM Usage When Idle: NANO uses about 100 MB of your RAM when it is idle. The CPU usage is stable at 0%. 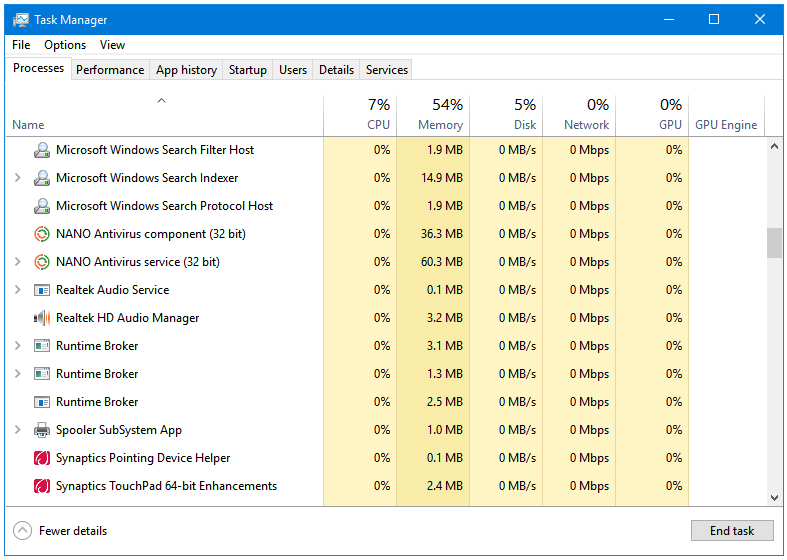 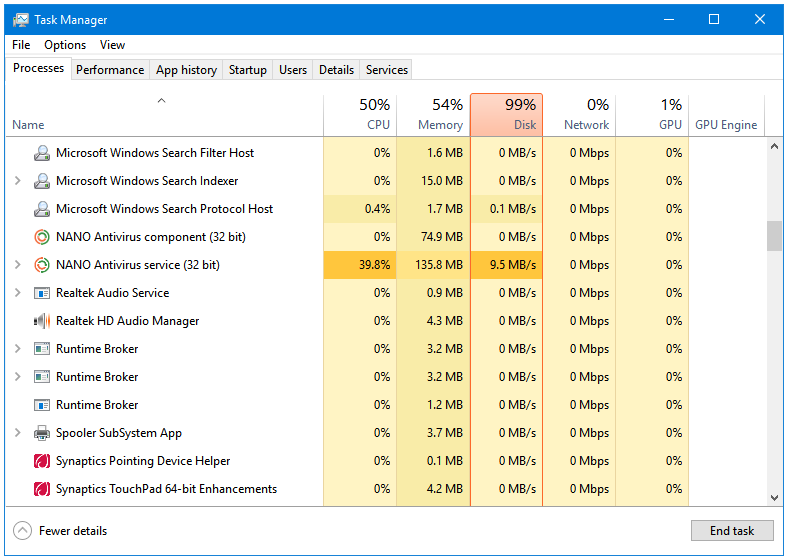 User Interface & Ease of Use

Going through each setting of this program is super easy. NANO uses a nice tabbed interface. A total of 16 tabbed windows are arranged inside 5 sections. A very easy on the eyes colour scheme is used. NANO also has Skin support, however, that’s available only in the Pro version.

There is one small non-intrusive banner image at the bottom of the Quick start tab in the Actions section of the program, which is also the Home screen of NANO Antivirus.

There is also one comparison table between the Free and Pro versions in the Upgrade to Pro tab under the Information section.

Occasionally, you get an alert window at the bottom-right corner of your computer reminding you to Upgrade to Pro.