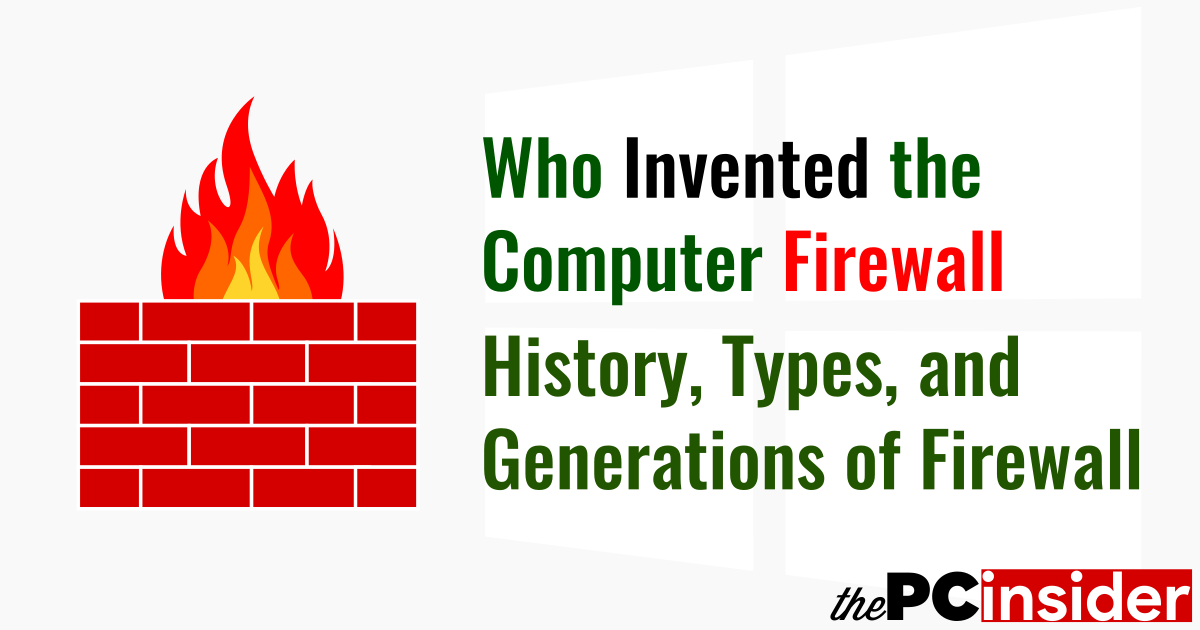 Who Invented the Firewall?

The History, Evolution, Types, and Generations of the Computer and Network Firewall

A firewall acts as a barrier between two networks, for example, between a company network and the rest of the internet. Or, between a home computer and the Internet.

In order to understand the various types of firewall technologies, one needs to be aware of the OSI model.

The Open Systems Interconnection (OSI) Model conceptually divides the network into seven layers, each one of which has a specific purpose. To make it easier, the top layer is the software layer and the bottom layer is the hardware layer, in between, we move from software to hardware (or from hardware to software).

The Seven Layers of the OSI Model are:

Evolution, History, Types, and Generations of the various Firewall Technologies

In 1988, Digital Equipment Corporation (DEC) developed the first generation of firewall technology called the Packet-Filter Firewall. The Packet Filter Firewalls inspected the packets of information transferred between computers of a network. If the packet did not match the Packet Filter’s rules, the packet was either dropped or rejected. The packet was allowed to pass if it matched the filtering rules. The filtering could be based on a number of mechanisms such as the source and destination network addresses, the protocols used, and the port numbers on both ends.

In 1989, AT&T Bell Labs developed the second generation of firewall technology called the Circuit Level Gateway, which was the first Stateful Firewall. A Stateful Firewall keeps information about the active sessions and connection states; it records all connections passing through it.

These firewalls use the connection state information to manage packet filtering. If a packet to be transferred does not meet the active connection, it is evaluated according to the filtering ruleset established for creating new connections. If it matched the rules, the packet was allowed to transfer. Because these kept tracks of the state of the connection, these were called the Stateful Firewalls.

The Stateful Firewalls monitor incoming and outgoing packets as well as the connection states, and then they store this information in the dynamic state tables. After establishing a connection, only those packets are allowed to pass through that are associated with the connections listed on the dynamic state tables. The sessions stored in this table time-out if no traffic has passed for a defined time period. This prevents the table from filling up.

The Stateful Firewalls are the second type of Network layer firewalls. These firewalls operated on the Transport Layer as well.

In 1991, Digital Equipment Corporation (DEC) released the third generation of Firewall technology called the Application Layer Firewall with their product called DEC SEAL (Secure External Access Link). These firewalls run on the Application layer. Therefore, these are capable of inspecting all of the data travelling to and from all the running software. The main aim of these firewalls is to protect the computers for malware.

As the name suggests, and Application Layer Firewall manages the traffic on applications such as Web browsers, and others that connect to the Internet and send or receive data. It also manages traffic on FTP, Telnet, and HTTP.

In 2004, International Data Corporation (IDC) coins a term in the Network Security called Unified Threat Management (UTM). A UTM firewall is a security system for the real-time network protection. It is the evolution of the traditional firewall into a comprehensive network security solution. A UTM uses technologies such as Network Firewall, Web Filtering, Gateway Antivirus, Intrusion Prevention System (IPS), Anti-Spam, VPN, etc. to protect networks from threats.

This was a short history of the various firewall types and generations.