Skip to content
Home › PC › Antivirus & Security › Who Invented the Antivirus? A History of Antivirus Software. 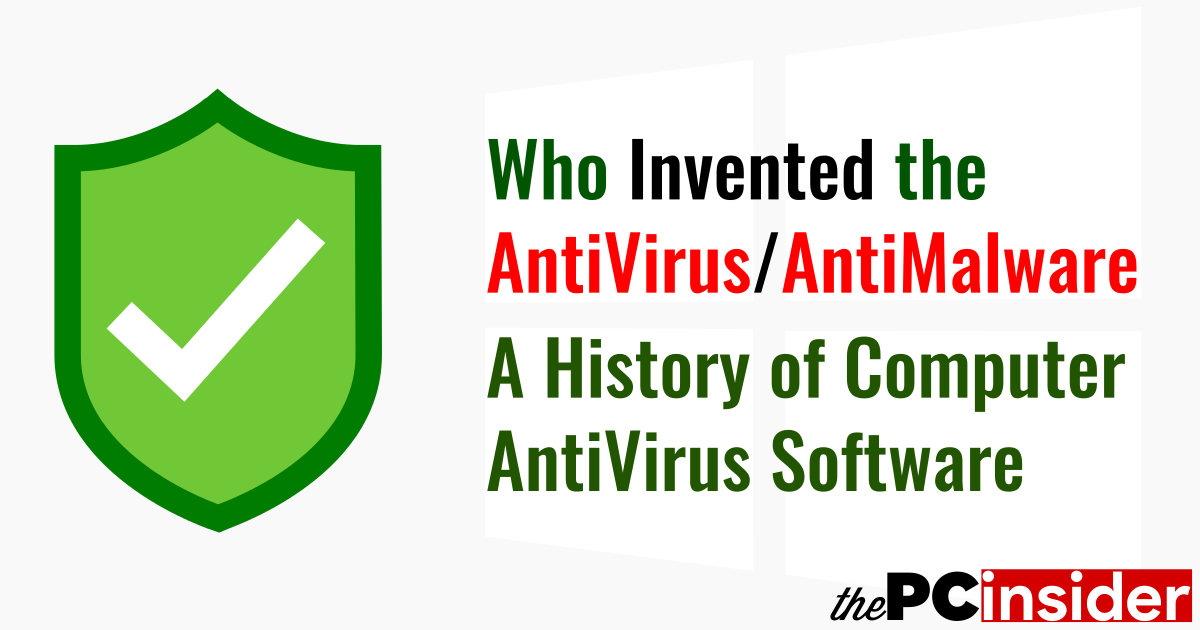 The Invented the Antivirus?

The History and Timeline of the Evolution of Antivirus software for Windows, Mac, and Linux operating systems.

The first virus and antivirus were created in an isolated environment. In 1971, a computer scientist named Bob Thomas created an experimental program called the Creeper at the BBN Technologies, USA. The Creeper program moved across the Digital Equipment Corporation’s PDP-10 mainframe computers, which were running the TENEX operating system, and used the ARPANET network, which was a predecessor of the Internet.

The same year, another computer scientist named Ray Tomlinson, who was also the co-worker of Bob Thomas, wrote a new version of the Creeper, which replicated itself as it moved across the network instead of just moving. To remove the Creeper from the network, Ray Tomlinson wrote another program called the Reaper. The Reaper moved across the ARPANET network, detected and removed the self-replicating Creeper program.

The Creeper and the Reaper are considered to be the first virus and antivirus respectively.

Fast forward to 1987, when the things really started happening in the Antivirus industry.

The first removal of an “in-the-wild” computer virus called Vienna Virus was done by a German security expert Bernd Fix in 1987.

A Short History of the First Antivirus Software, Antivirus Companies, and the Antivirus Industry.

McAfee was founded by John McAfee in 1987 as McAfee Associates. McAfee released their first antivirus product called VirusScan in 1987.

John McAfee is the considered as the inventor of the computer Antivirus software. John McAfee’s PC was one of the computers infected with the “Brain” virus, which was released by two Pakistani brothers in 1986. John knew how to remove this virus but most people didn’t. So, he started travelling around the country and fixing computer problems. After some time, he decided to automate the virus detection and removal process by making a software. This software was McAfee VirusScan, the world’s first antivirus program.

G Data was founded in Germany in 1985. It was founded by Kai Figge and Andreas Luning. They released their first antivirus called Anti-Virus Kit (AVK) in 1987.

ESET was founded by Peter Pasko, Miroslav Trnka and Rudolf Hruby in 1992. But they had already created an Antivirus.

The first antivirus by ESET called NOD was created in 1987.

Avira was founded as H+BEDV by Tjark Auerbach in 1986 in Germany. In 2006, H+BEDV and AntiVir become Avira.

H+BEDV launched their antivirus AntiVir in 1988.

They released their antivirus Avast antivirus in 1988.

Ahn Cheol-Soo launched his antivirus called V1 in 1988. He later founded the company AhnLab in 1995 in South Korea.

In 1988, Alan Solomon founded S&S International in the United Kingdom. He created his antivirus called Dr. Solomon’s Anti-Virus Toolkit in 1988.

Sophos was founded by Jan Hruska and Peter Lammer in 1985 in England. They demonstrated their Antivirus called Vaccine in 1988.

In 1989, Friorik Skulason created the F-PROT Anti-Virus. He later founded his company FRISK Software in 1993 in Iceland. In 1991, F-PROT launched their antivirus with world’s first heuristic behaviour scanner.

Symantec was founded by Gary Hendrix in 1982 in the United States of America. Symatec made their first antivirus product for Macintosh called Symantec Antivirus for the Macintosh (SAM) in 1989.

Trend Micro was founded by Steve Chang, his wife, Jenny Chang, and her sister, Eva Chen in the USA in 1988.

In 1991, Gianfranco Tonello created his antivirus software called VirIT eXplorer in Italy. He founded his company called TG Soft in 1992.

Igor Danilov founded the company Dr. Web in 2003 in Russia.

The Data Fellows antivirus was launched in 1994.

F-Secure was the first company to develop the Anti-Rootkit technology. They released their anti-rootkit program called BlackLight in 2005.

Softwin, the parent company of Bitdefender antivirus, was founded in Romania in 1990 by Florin Taples, and his wife, Mariuca Taples. Softwin released their first antivirus product called Antivirus eXpert (AVX) in 1996.

In 2001, Tomasz Kojm released an Antivirus for GNU/Linux called ClamAV.

This was a little history of the earliest computer antivirus software and antivirus companies.

7 thoughts on “Who Invented the Antivirus? A History of Antivirus Software.”