Skip to content
Home › PC › Antivirus & Security › How to Find the Best Antivirus for Your Windows PC?

An Antivirus is an essential component of the Windows PC. It is one of the first software to be installed on Windows. But there are so many choices, which one to pick, and how to find the best antivirus?

Find the Best Antivirus for your Windows

Section 2: Get Information From Experts

1. What is an Antivirus?

An Antivirus is a computer security software that protects a computer from all kinds and variants of malware by continuously monitoring the execution of programs and files, and blocking or removing any malicious programs upon detection using its various technologies. It monitors the internet surfing to scan and protect from harmful websites and phishing attempts. Any incoming from the internet or removable storage devices such as compact discs, or USB flash drives is scanned to block any kind of malware attack on the computer.

A Malware is an umbrella term that covers all kinds of malicious software, in fact, the term Malware is made from two words Malicious and Software. The various types of malware are:

The most popular term for a computer infection is a Virus, and hence the most logical term for a program that protects against these infections is an Antivirus, but technically this is not the most accurate term. All kinds of computer infections are collectively known as Malware, and hence the program that protects against all types of malware is an Antimalware

4. What are the Various Types of Antivirus Products

A real-time antivirus is the actual antivirus that is always working in the background to protect you. The file scanning component monitors every program or file execution, and blocks malware upon detection. The web protection component monitors your internet access and blocks malicious website. A real-time antivirus also scans and protects all of the removable devices that are connected to the computer, and blocks various kinds of malware that propagate through these removable devices. A real-time antivirus is always active, and is automatic in nature. It takes place in real time whenever a program is executed, or a new file enters the system through downloading or from external media such as USB.

A second opinion malware scanner is an on-demand file scanner that scans Windows for malware, and then deletes the detected threats. It works differently from a real-time antivirus, which includes an on-access file scanner that works along with various technologies such as signatures, heuristics, behavioural analysis, and cloud to detect and remove threats in real-time. The user selects the programs, files, and folders to be scanned.

5. How does an Antivirus Protect Your Computer from Viruses?

An antivirus uses various technologies to protect the user from various types of malware.

Following are the technologies used by Antivirus products to detect malware:

The Signature scanning is the oldest and the simplest kind of detection technique. The antivirus companies have a database that contains the signatures (or pieces of code) of all the previously detected malware. This database is known by various names such as Signature Database, Signatures, or Virus Definitions. Antivirus programs continuously scan all of the files and programs on the computer, and then match them with their Signatures. If a file or program matches with a malware available on the database then it is blocked, and the user is notified.

The Heuristic scanning is a more advanced form of Signature scanning. Signature-based scanning is the oldest and the most commonly used method of malware identification but it’s not the most reliable one. It cannot protect against threats that haven’t been identified and whose signatures haven’t been created yet. Therefore, the system is vulnerable to such threats. Heuristic Analysis uses algorithms to determine if the program is malicious or not. It examines the code of the program, and tries to find out the outcome of this code using various methods. If the code is similar to the code of a malware already present in the signature database then it blocks the program because it could be a new variant of that malware. This way, it is helpful is catching the new variants of malware. Heuristic analysis is the root cause of false positives, because anti-malware considers a program a malware based on limited information. In reality, that specific program may not be harmful at all.

This method is also useful for identifying malicious programs that are yet to receive virus definitions from the manufacturer, or those that have managed to remain hidden until now from the antivirus developers. This method, as the name suggests, analysis the behaviour of the programs. If the behaviour of a program matches that of another malicious program, then the antimalware recognises it as a malware. This method also has a downfall. It is responsible for increased number of False Positives. A legitimate program might be accessing important locations of the system, but the antimalware may block it assuming it to be a malicious program.

New malware are appearing at an astonishing rate. It’s not possible to create signatures for all of the malware that are found every day. So, in order to provide a more efficient protection to their users, the antivirus companies added another weapon to their arsenal to combat the malware more effectively. In Cloud scanning technology, the malware analysis is done on the cloud i.e., on the antivirus vendor’s servers. The antivirus product installed the user’s computers sends the file related information to the cloud for analysis. Antivirus companies, in fact, advertise this feature, and there are some products that come without signatures. The Cloud analysis along with other detection techniques is used to scan and detect malware in those programs. Cloud has benefits such as virus definitions or signatures are not downloaded on the computer, so no internet and disk space usage. Cloud analysis makes a cloud antivirus lighter than a traditional signature-based antivirus. The drawback of using a cloud antivirus is that it always requires an active internet connection.

The Sandbox scanning technology involves running the programs in a virtual environment to check their actions. If a program acts like a malware then it is marked as one. The sandboxing feature can also be used to run those run all of the files that the antivirus can neither whitelist nor blacklist. So, running a file in a sandbox container gives you the best of both the worlds. If the file was malicious then it can’t harm your computer because it was run in a virtual environment or sandbox container, and if it was a legitimate program, then you had the pleasure of running it.

Various independent companies perform different types of tests on different antivirus products to test the protection level provided by them. Then, they publish the results in reports for the users. You can visit their websites to read the latest test results. These reports are made available in the downloadable PDF file format as well.

Some of the most reputed independent labs that do antivirus testing are:

Virus Bulletin releases a chart with two coordinates; one side denotes Reactive detection while the other denotes Proactive detection; both of them start from 50% and end at 100%. A perfect product is one that scores the most on both the sides. 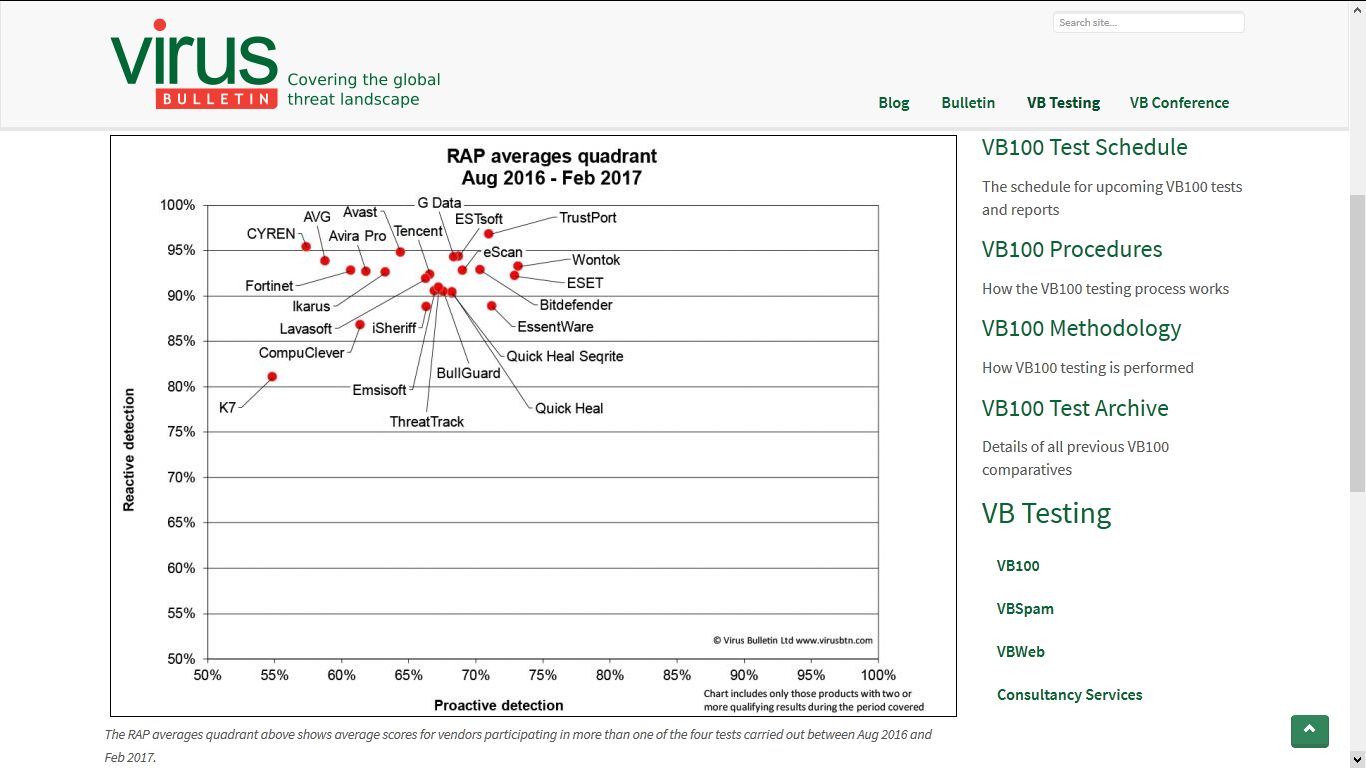 AV-Test provides independent test and reports on antimalware software and other security tools for various platforms such as Windows, Mac, and Android.

AV-Test gives marks to various products in three categories – Protection, Performance and Usability. AV-TEST Top Product medals are given to products that perform exceptionally well on all the categories. 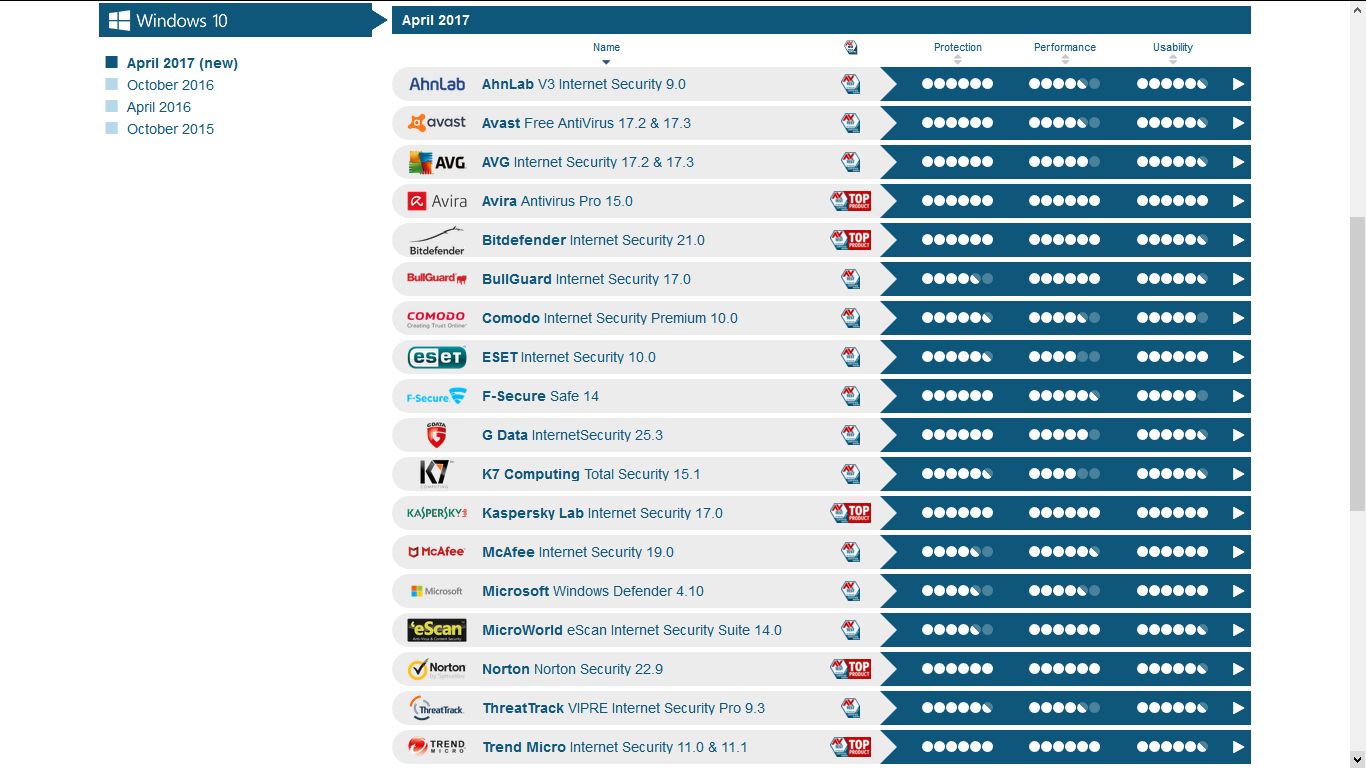 AV-Comparatives provides independent test results on antivirus software. They perform a number of tests. These are: 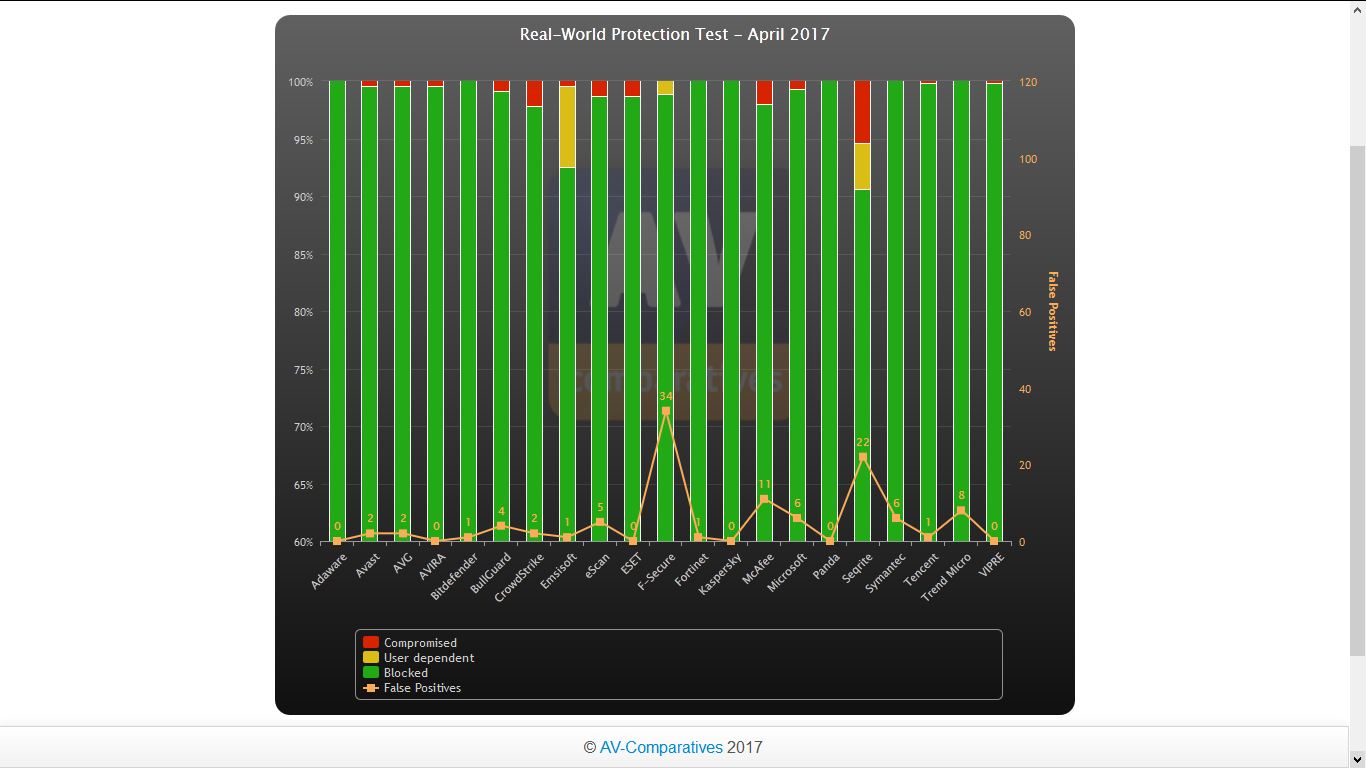 The Online Forums let you do more than just read the reports. Here, you can communicate with other new or experienced users – ask questions about your problems, replay to posts, provide answers to the questions posted by other users; create threads about the products that interest you, or subscribe to various threads to stay updated.

Following are some of the most popular computer security related online forums:

7.1 MalwareTips – It is, probably, the most popular young forum right now. It gained popularity very soon thanks to its loyal and ready to help members. There are always giveaways going on for various premium products in this forum.

7.2 BleepingComputer – Probably, the most respected online computer forum. The amount of information available here is overwhelming.

7.3 WildersSecurity – The Wilders Security forum has been active for many years. Its focus is on the computer security software.

7.4 Raymond.CC – The Raymond.CC is one of the best Windows software related blog. Its forum has a group of active and dedicated members.

The Online Magazines are the websites that provide news, reviews, and articles on daily basis for its user. There are many famous ones that come to mind we are concerned only with the ones that have a dedicated section for antivirus and other computer security software products.

This is the most timesaving option, as you do not have to read articles or reports in the form of tables and graphs; also, you get to see the product in action here. Various YouTubers install antivirus products in their VM Windows installation, and then bombard the antivirus with all kinds of malware to test the protection levels provided by them.

The most informative and active Computer Security Software related YouTube channels are:

9.2 Britec09 – Brian, from Britec09 has been making YouTube videos for about a decade now, and they are not limited to the antivirus category only; here you get all kinds of how-to guides, tutorials, and reviews about all types of Windows software.

9.3 Computer Solutions – A fairly new antivirus review channel with no commentary but through reviews.

Using the information from all these sources, you can get a fair idea of what is a good antivirus for you. But none of the above-mentioned products or methods is foolproof. They cannot provide a 100% protection. You have to think about the worst-case scenario. Your antivirus may have detected 999 out of a 1000 malware missing only one, and that one eventually strikes you. Malware are designed to bypass these antimalware products, it’s a constant battle. Don’t be dependent on a software to protect your data. There can also be a hardware failure, a physical damage. You can lose your data anytime. Everything about your computer is replaceable expect your data. You can be 100% safe only when you keep regular backups of your data on external storage devices.

So, a word of advice, literally: Backup.